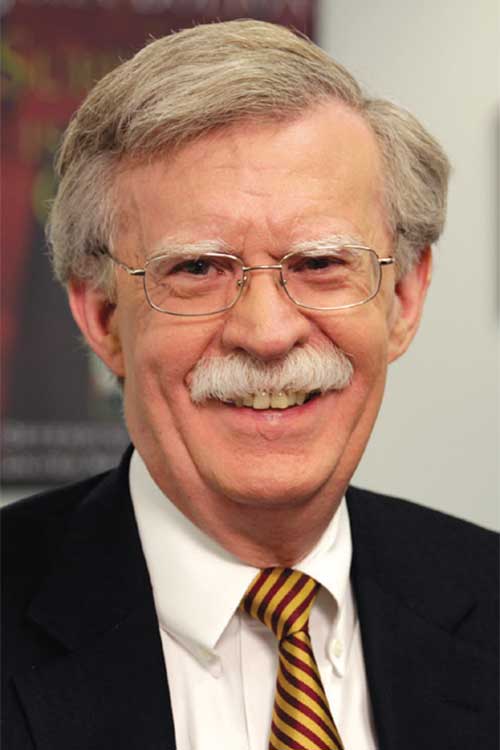 John R. Bolton was appointed as U.S. Permanent Representative to the United Nations on August 1, 2005, and served until his resignation in December 2006. Prior to his appointment, Ambassador Bolton served as Under Secretary of State for Arms Control and International Security from 2001 to 2005.

Throughout his distinguished career, Ambassador Bolton has been a staunch defender of American interests. While Under Secretary of State, he repeatedly advocated tough measures against the nuclear weapons programs of both Iran and North Korea, and the proliferation of weapons of mass destruction worldwide. He led negotiations for America to withdraw from the 1972 Anti-Ballistic Missile Treaty so that the Bush Administration could proceed with a national missile-defense program.

During his tenure at the United Nations, he was a leading voice on the need for the Security Council to take strong and meaningful action against international proliferation and terrorism. He continued his efforts to prevent North Korea and Iran from gaining deliverable nuclear weapons. Along with France’s ambassador, Ambassador Bolton led the Security Council to approve a unanimous resolution to end the summer 2006 Hezbollah war on Israel, to authorize U.N. peacekeepers and to create an arms embargo against Hezbollah. He also assembled an international coalition that blocked the bid of Hugo Chavez, Venezuela’s Marxist strongman, to join the Security Council.

Ambassador Bolton was also an advocate for human rights while serving at the U.N. He arranged the Security Council’s first deliberations on Burma’s human rights abuses. He invited actor George Clooney and Nobel laureate Elie Wiesel to brief the Security Council in September 2006 on the Khartoum regime’s mass murder of non-Arabs in Darfur, Sudan. “Every day we delay only adds to the suffering of the Sudanese people and extends the genocide,” Ambassador Bolton said. He engineered the Security Council’s approval of 22,500 U.N. peacekeepers in Darfur, and he worked to pressure Sudan’s government to accept these personnel atop the 7,000 African Union soldiers already on site.

Ambassador Bolton is an attorney. Currently, he is of counsel at Kirkland & Ellis LLP, with a focus on counseling domestic and international clients in complex corporate, litigation, internal investigations, regulatory and competition matters. From 1974 to 1981, he was an associate at Covington & Burling in Washington, where he returned as a partner in the firm from 1983 to 1985.

He is the author of Surrender Is Not an Option: Defending America at the United Nations and Abroad (Simon & Schuster, November 2007) and How Barack Obama Is Endangering Our National Sovereignty (Encounter Books, May 2010).

Ambassador Bolton currently serves as a senior fellow at the American Enterprise Institute, a nonprofit public policy center dedicated to preserving and strengthening the foundations of freedom through research education and open debate. He is also a contributor to Fox News Channel and Fox Business Network, and his op-ed articles are regularly featured in The Wall Street Journal, The New York Times and the Los Angeles Times.